What amazed us each time we embarked on our 48 hour scramble, was the willingness of others, whether lifelong friends or people we've just met in the Lehigh Valley business community, to help in any way possible - that could be fulfilling the role of an actor, providing a filming location, or lending a much-needed prop. It really has been a special community of relationships we've built through the years. Thank you to everyone for making what we do feel so special!


It all started a few months ago when Julia started receiving reminder emails that the 48 Hour Film Project was coming up in New York City. Rocky and Julia began reminiscing about the great time they had during the last 48 hour film project, during which they created a film called BRAINS!, that included blood,  zombies, puppies, bunnies, and one or two laughs.

Of course, Casey couldn't be left out and wanted to experience the craziness for herself!  So, one afternoon, she watched BRAINS! and was hooked. A few days later, while Rocky had his headphones on and didn't have a chance to object, Casey and Julia signed up for this year's 48 Hour Film Project! FireRock was set to compete against 60 other teams, all creating short films in only 48 hours. Well, this should be fun.

Fast forward two months to Friday, May 29th at 7p.m. - the official start of the contest. Rocky began the evening by asking - one more time - if we were actually doing this, because, in all reality, he's the one who has to edit the masterpiece, which means way less sleep for him and way more of a reason to want to jump off a bridge before it started. But nope, we were in this for the long haul... the whole 48-hour "long haul!"  (...plus the lack-of-sleep-hangover we would have after the weekend.) The #FireRock48 team, along with a few close friends, gathered in the office to start brainstorming how the heck we were going to make a Superhero movie (our assigned genre) in only 48 hours. Ideas from sidekick-turned-hero, to villain movies were thrown around, but nothing stuck. Around 3:30a.m., those left standing abandoned the office for bed, set to return in the morning to finish the idea. At 10a.m. we reconvened and we wrote our story... and what a story!

By 2p.m., a rough script was written, the story line was perfected, and phone calls were made. Our cast came together and the team dispersed to gather objects, costumes, materials, equipment, and - of course - some coffee. Somehow, by 2:30a.m. ...yes, just over 12 hours later, filming was wrapped and it was time to edit.  Rocky got a whole three hours of sleep and got right to work!  Here are some behind-the-scenes pictures and, at the bottom, the end of the story of our weekend. 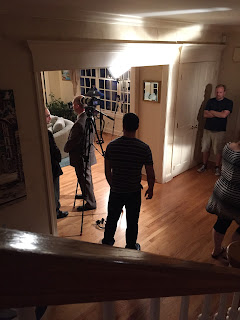 It Got Very LATE Very Quickly!

Luckily, this was not the sign that Rocky and Casey saw when they went to hand in the film... although it was a very close call. 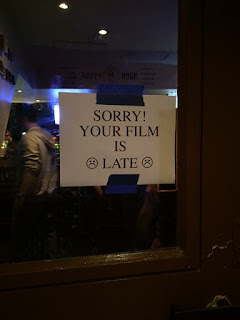 Rocky, Julia, and Casey left Emmaus at 5:30 p.m. on Sunday night to get to the drop off location in NYC by 7:30 p.m. Nah, we weren't stressing... calm, cool as a cucumber... as we drove through POURING rain and TRAFFIC into the city! At 7:16p.m. our GPS was saying 4 minutes to go and .3 miles away... and the road was BLOCKED where we had to turn to get to the drop-off. Do we get out and run? Yes, we run! Julia drove around Washington Square park, arriving at 7:29p.m. The film would have been late had we all stayed in the car, so, Rocky and Casey jumping out of the car .3 miles away in the rain and running to the drop off venue was the best decision we could have made. "This is what we've been training for," Rocky said, as they jogged along the streets of NYC, looking for a bar that he's pretty sure Casey has no idea how to find ...and there was a good chance they were running the wrong direction and there's no way they will get there in time. Rocky, incredulous that they've made it, jogs with Casey into the bar and hand in the video with less than 5 minutes to spare. 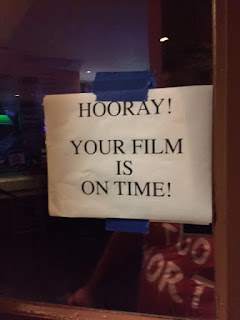 Rewind to Rocky asking "Do we really want to do this?" at the beginning... maybe he knew what we were in for? Above is the actual picture we saw, and it was totally worth it. New York City's 48 Hour Film Project consisted of over 60 films this year! Our film made the Top 16 and was included in the Best Of Screening at the Cantor Film Center where it was awarded Best Sound Design! The required elements this year were:

We hope you have as much fun watching the film as we had making it! AND who knows… next year, we could be calling you for help!