We snapped the photo below as we entered McFadden's at Citizen Bank Park in Philadelphia on August 11, 2015. 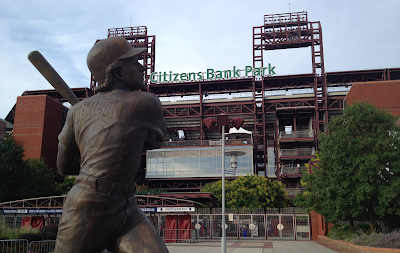 Maybe it was a sign that we were about to knock one out of the park... but seven? Simply unimaginable. Our hearts stopped the first time we heard our name, and as it was called for that seventh time, one quote instantly came to mind.


"In order for people to succeed, all they need is a little nudge - someone to give them the opportunity."

There are so many of you that have given us - and continue to give us - that "nudge," and we will be forever thankful. The above remark was recently shared with us by Cops 'n' Kids Lehigh Valley President, Beverly Bradley during a memorable and meaningful conversation at The Bethlehem Chamber's 2015 Annual Dinner, and it was like everything came full circle.

A piece which premiered at that same Annual Dinner the year before, The Bethlehem Story, was the first video produced in the qualifying time frame for this year's Emmy® submissions.


This story of Bethlehem's renaissance, hosted and narrated by Liz Keptner, ended up being one of our seven nominations! Here are the nominated videos, and all who were recognized for their contributions:


The Bethlehem Story - Life After Steel from Lehigh Valley TV on Vimeo.


Human Interest Program Feature/Segment: “A Will to Survive”


Shane Burcaw - "A Will to Survive" from FireRock Productions on Vimeo.


A Will to Survive is the second collaboration between FireRock Productions and Shane Burcaw, President of Laughing at My Nightmare, to earn an Emmy® nomination. The first, Happiness is Always an Option, went on to win a 2013 Mid-Atlantic Emmy® Award!


The above video is a preview of the full length version. Better Start Early is a 17-minute educational piece about early detection and prevention, created for and with Weller Health Education Center. The video is centered around Sarah Trimmer, an inspiring individual who was brave enough to share her experience with cancer.

Craft achievement awards are presented to individuals for excellence in a specific craft discipline. Rocky has been nominated in three craft categories: Short Form Editor, Program Editor, and Program Photographer.

This is one of the videos submitted for consideration of craft achievement:


The 33rd Mid-Atlantic Emmy® Award presentation will take place at the Philadelphia Hilton on Saturday, September 19th, 2015. Congratulations to all of the nominees - we are humbled to be in the company of so very many talented and deserving individuals.
Posted by FireRock Productions at 10:22 PM