The ballroom at the Philadelphia Hilton on Saturday, September 19th, 2015 was packed for the presentation of the 33rd annual National Academy of Television Arts and Sciences Mid-Atlantic Emmy® Awards. The energy was contagious. As we walked in, we immediately felt humbled to be in the presence of so many talented media makers. It was an amazing and overwhelming realization: we were standing in a room full of hundreds of Emmy® nominees spanning 77 different categories, and we were lucky enough to be included in 7 of them. Our nerves were only settled by remembering that we already had plenty to celebrate, regardless of what was engraved on the statues lined up backstage. We walked into that room surrounded by more than just our clients and colleagues - we were there with friends.

We know that what we do doesn't exist without the people and groups who ask us to help tell their stories. We are so grateful to have been able to share Saturday's gala with Laughing At My Nightmare, Inc., The Chamber, Discover Lehigh Valley, Countess Communications, and Weller Health Education Center. The way in which these groups came together to support and celebrate each other and FireRock Productions was nothing short of extraordinary. 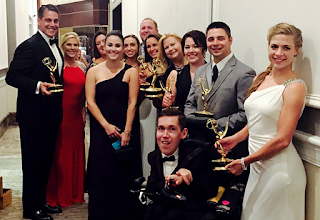 When "A Will to Survive" and FireRock Productions were called for the Human Interest Program Feature/Segment as the first of what would be four wins that evening, we were shocked. To have won one Emmy® with Shane in 2013 for "Happiness is Always an Option" was unbelievable, but to win a second with him… We have no words. He is one of the most amazing individuals we have ever known, and has taught us so much. Our lives have been immeasurably enriched by Shane, his family, and his non-profit, Laughing At My Nightmare. 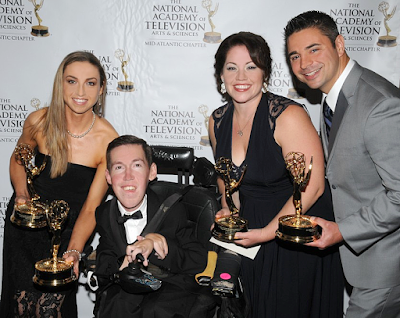 To then have your name called, as an individual, celebrating a craft that you love to do… we're pretty sure by the brevity of his acceptance speech that Rocky was stunned! Rocky celebrated his Craft Achievement Emmy® for Photography by thanking Julia for allowing him to "turn his hobby into a career." This is an award celebrating the skills of an individual, but, according to Rocky, "it takes an entire team around any successful individual to achieve something like this." 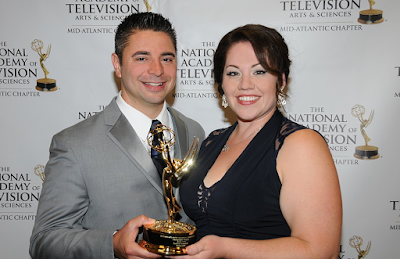 Nobody celebrated in a bigger way that evening than Joe Uliana and Lynn and Don Cunningham. What a fun group to share an evening with! Joe nearly knocked his chair over when "The Bethlehem Story" won for Public/Current/Community Affairs Feature/Segment. The jokes, the hollering, the laughter… Don and Joe kept the mood light all night! And what a wonderful thing to be celebrating - Bethlehem, and all of Lehigh Valley have so much going on and so much to be proud of! 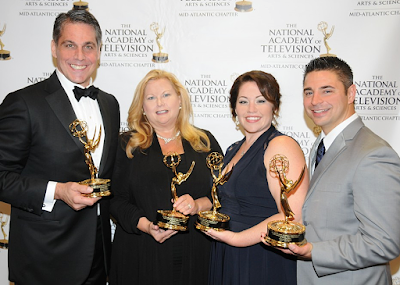 The fourth and final award we received Saturday was in the Lifestyle Program Feature/Segment category for "DISHcover Lehigh Valley: Porters' Pub," a project created with the help of Countess Communications, and hosted by the indomitable Kim Lilly, Executive Vice President for Discover Lehigh Valley. Kim was, at first, unsure about hosting the series, but, with a little arm-twisting, conquered her nerves and won an Emmy® for it! For this episode and more, visit: vimeo.com/channels/dishcover 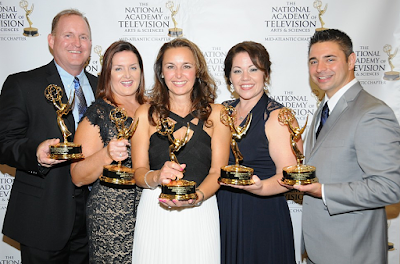 Having 20 people on our team that evening, each of them representing the many other individuals who have believed in us and been there for us from the beginning, was quite possibly even more awesome than winning. We could never ask for a better support system. And we never could have predicted or asked for the support that each of those individuals showed to each other.

For us, this is indicative of why and how we achieve the successes that we do. It's about you: all of the people who ever believed in us, and continue to believe in us to this day; everyone who has ever given us an opportunity. We do not create videos for us, we create them for you, your businesses, your families, and your colleagues; and we want to be there for you in return, and give you the best product, which you deserve.

The four Mid-Atlantic Emmy® Awards that FireRock came home with represent not just the accomplishments of FireRock and the other individuals listed on the awards, but also Lehigh Valley, its organizations, and the people who live, work, and play here, as well as the companies that we are lucky enough to consider extensions of our team, just as much as we aim to be an extension of theirs.

We thank you - our friends, families, colleagues, and clients - for these awards!

Posted by FireRock Productions at 10:07 AM No comments: